The Epson International Pano Awards →competition is dedicated to the art of panoramic photography and is the most important worldwide competition in the field of panoramic photography. Each year, nearly 1.000 of the greatest photographers in the business, both professional and amateur, join the contest from over 50 nations. The competition is usually managed by EPSON Australia. Some photographers took amazing shots from helicopters or drones, often in remote, almost inaccessible locations… Our goal was different. We chose to show situations and environments that are closer to our daily routine, choosing unconventional POV to shoot them. 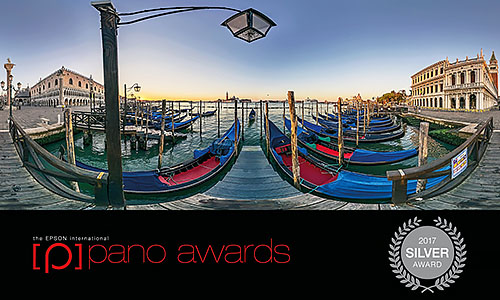 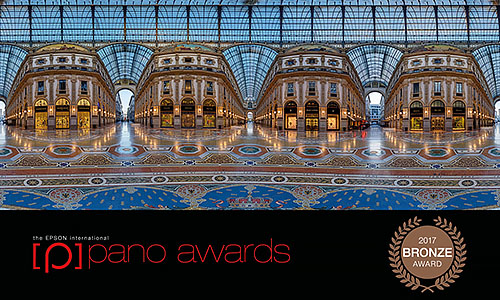 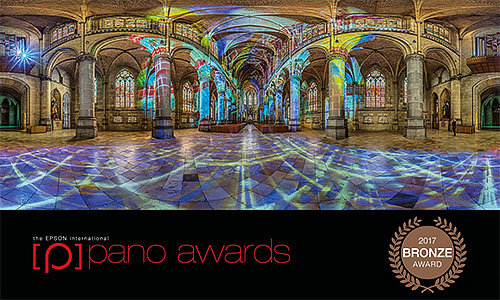 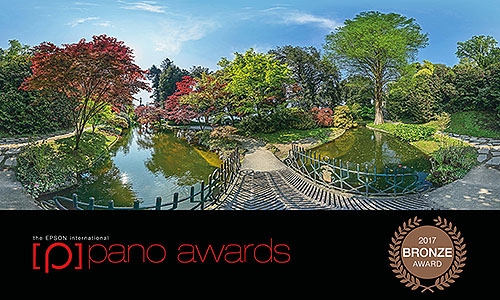 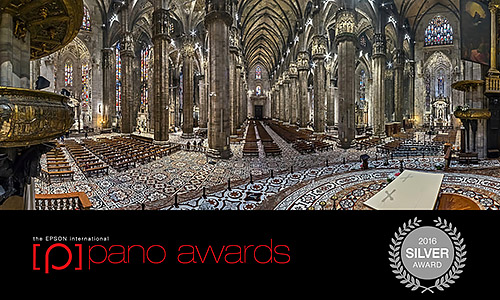 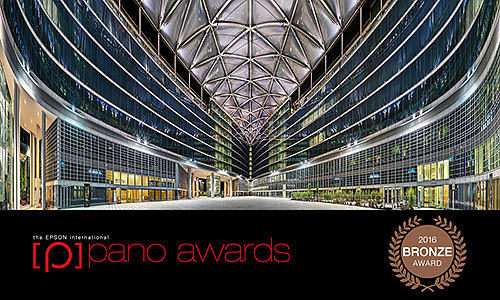 In the 2015 edition, we got a bunch of positive results: two Silver Medals and six Bronze Medals. This year, we chose to introduce some pretty peculiar panos to the competition. In some of the panoramic images, that include the two photos that were awarded with the Silver Medals, people play an important part in the picture and are carefully placed to enhance its liveliness and enjoyability 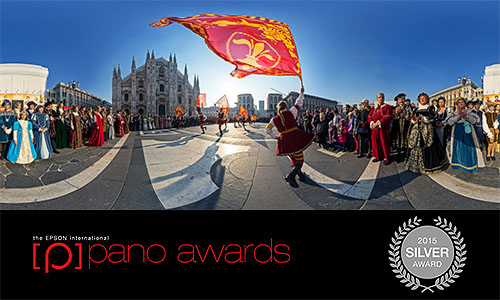 Piazza del Duomo has been the heart of Milan for centuries. Once a year, the Renaissance Age comes back to life in front of the beaufitul Duomo, thanks to the reenactment of a very important wedding that took place in 1441, when Bianca Maria Visconti and Francesco Sforza tied the knot. Admire hundreds of beautifully dressed Dames and Knights, while the city banners shine in the sun! 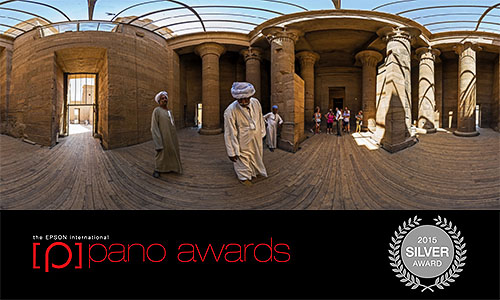 SILVER MEDAL – The Temple of Goddess Isis in Philae

The Temple of Goddess Isis is located in Philae, a tiny island in the Nile region that stands between the Aswan dykes in southern Egypt. The huge temple halls are a pleasant, cool, soothing refuge in the harsh August sun. …and the photographer captures the locals’ attention and curiosity. 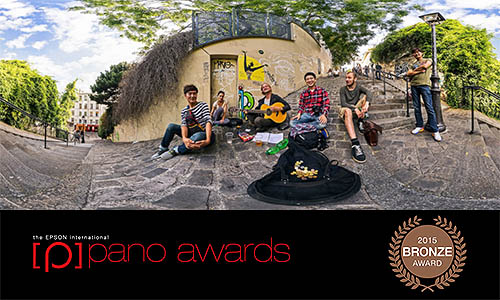 BRONZE MEDAL – A guitar in Montmartre

Montmartre is one of the most popular places in the Paris nightlife. Many tourists and parisians choose to hang out there. This lovely hill hosts lot of stairways; right at the top, you can find the beautiful Sacré-Cœur Basilica. You can feel all the warmth and the joy of a genuine parisian night in this shot. Have a beer and rock on! 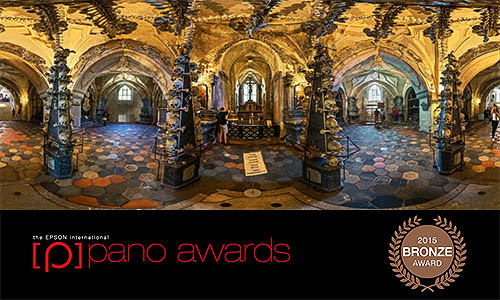 Sedlec, a tiny city in the Kutnà Hora district in Czech Republic, hosts a peculiar mortuary chapel. You just have to descend a few steps to enjoy a unique view. In the Nineteenth Century, the bones from thousands of medieval human skeletons have been carefully and artistically arranged, creating an atmosphere that is both magical and macabre.

This year we achieved awesome results in the competition: a Gold Medal, two Silver Medals and four Bronze Medals. The pano that got the Gold Medal also obtained the third place in the “Built Environment – Architecture” class and the Bronze Medal in the “360° VR Photography” class. 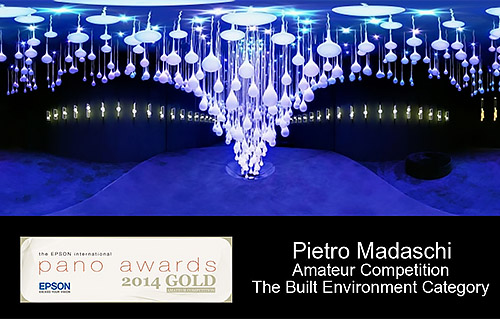 GOLD and Bronze Medals – Blue Pomegranate , “Melograno Blu” Chandelier
A stunning chandelier is the protagonist of this shot; its many glass drops reflect the light in a delicate, elegant way. The chandelier has been crafted by Melogranoblu, a designer lighting company that is located near Bergamo. This image got the third place in the “Built Environment – Architecture” class 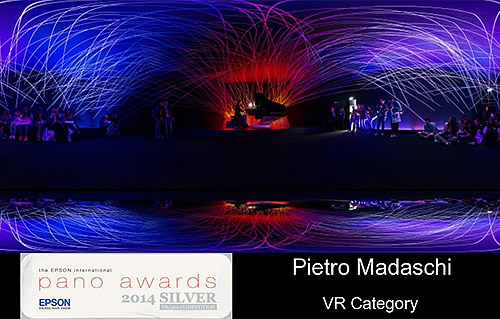 SILVER MEDAL– Piano and lighting perform together
In a dark room, a few ray of lights break apart the obscurity with their bold color, teaming up with the music from a piano: the pianist and his instrument are alone in front of a silent audience. 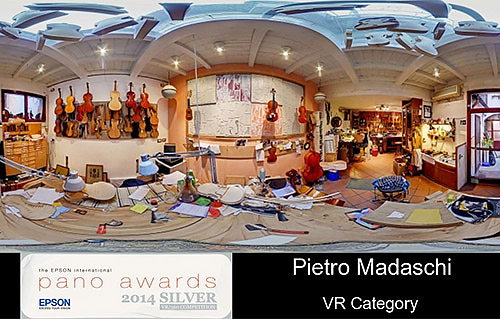 The 360° panoramic shot is a moving portrait of Riccardo Bergonzi’s routine while he’s at work in his Lutherie. The luthier business flourished in Cremona since the Sixteenth Century, thanks to the Amati and the Guarneri families and, of course, to Antonio Stradivari: to this day it still plays a huge part in the city tradition, and it has been listed in the UNESCO Intangible Cultural Heritage. 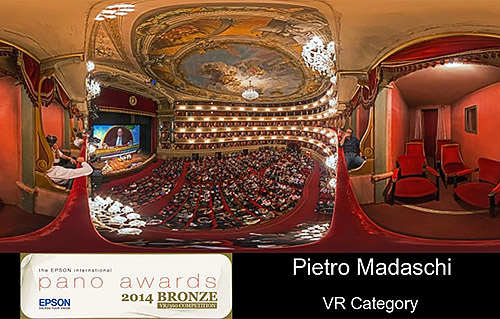 Unusual 360° panoramic view from the stage of the theater that Bergamo chose to dedicate to its famous citizen Gaetano Donizetti, a magnificent musician. During the Bergamo Scienza Festival, the theater hosted several lectures: in this pano you can see Frank Wilczeck, that was awarded with the Nobel Prize in Physics. 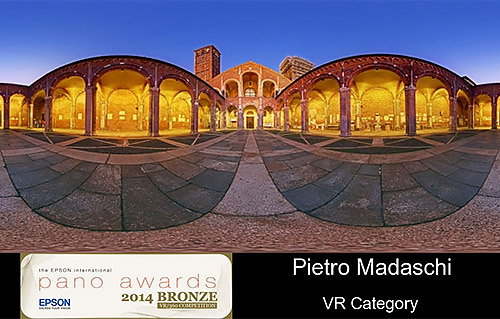 BRONZE MEDAL – St. Ambrose Cathedral, Milan , “Basilica di Sant’Ambrogio, Milano”
The turquoise light of dusk is the perfect setting for the Romanesque Atrio di Ansperto bricks in the Sant’Ambrogio Basilica, one of the most ancient churches in Milan. 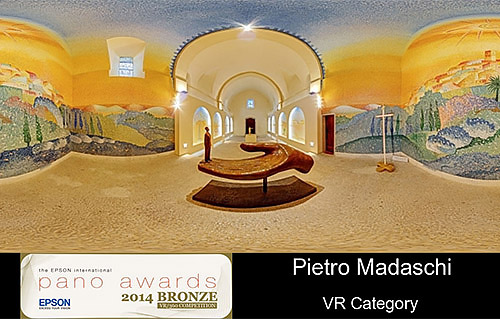 BRONZE MEDAL – The White Penitent Chapel by J. M. Folon in Saint-Paul de Vence, France
Completely redecorated by the famous belgian painter and illustrator Jean-Michel Folon, the tiny White Penitent Chapel charms the public with its many colors. It’s located in a tiny medieval village, full of historical buildings and very close to the beautiful beaches of the French Riviera.

When we attended the EPSON Pano Awards for the first time, in 2013, we obtained a Silver Medal and five Bronze Medals. 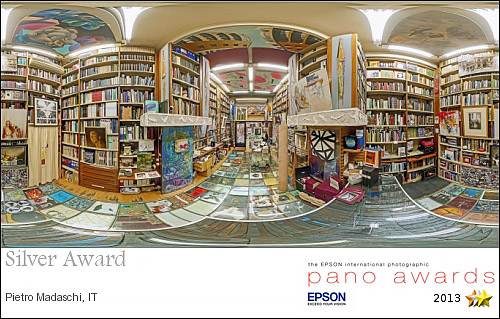 SILVER MEDAL – The Bocca Historical Bookstore in Milan
The Bocca Historical Bookstore is a tiny book shop in the heart of Milan, in the Vittorio Emanuele II Galleria. In this small bookstore everything is a piece of art: not only the books, but also the pavement, the ceiling, the walls and the table that you can see when you look “down” in the pano. 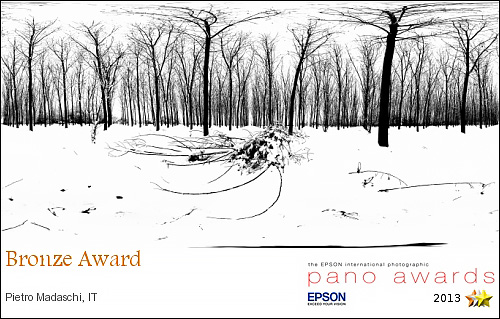 BRONZE MEDAL – Poplars in the snow
The Po Valley is full of poplar woods; the trees line up like some dutiful little soldiers in the countryside. In winter the snow dulls the colors; symmetry and geometry become more apparent and play an important role in the landscape. 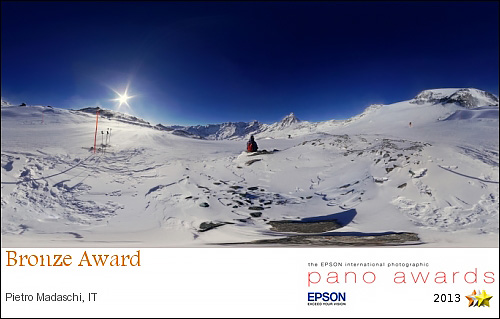 BRONZE MEDAL – Solo and Mount Cervino
This pano has been shot during a sunny and windy day in Valtournenche. The Mount Cervino and Grand Muraille rocks separate two huge spaces, dipped in white and blue. And there the person stands, alone. 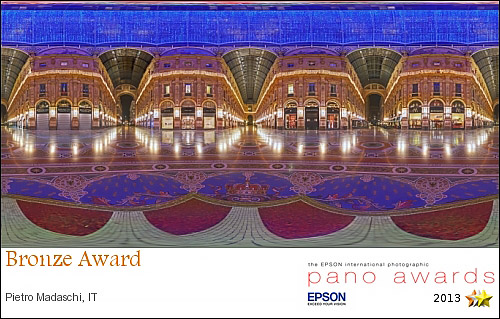 BRONZE MEDAL – The Vittorio Emanuele II Galleria in Milan during the Christmas Festivities
The Vittorio Emanuele II Galleria, one of the most fascinating places in Milan, gets even more magical and colorful during the Christmas festivities, when its large vault is lit up by thousands of tiny blue twinkling lights and its walls get a golden makeover. 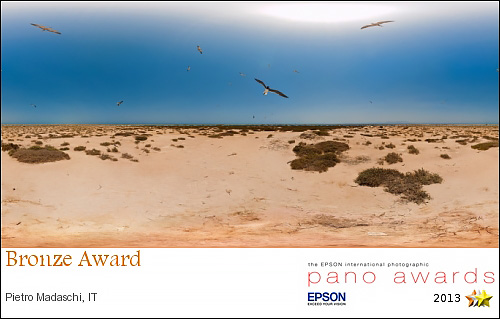 BRONZE MEDAL – The Hamata Islands in the Red Sea
In Egypt, some islands that face Marsa Alam are completely free from any kind of human presence. Rising just 1 mt from sea level, they’re home to a bunch of seagulls that are pretty jealous of their beloved kingdom, hot and hostile. 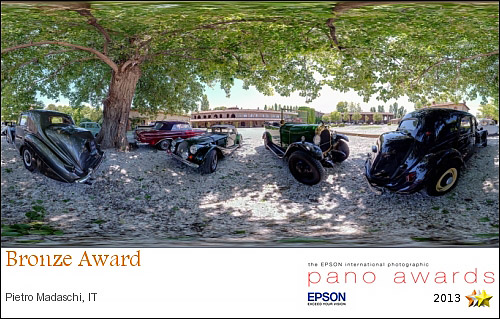