Milan in 360°: The squares in the City Center

In Milan The squares act as intersections and meeting places. Of particular interest are most of all the ones near the city center. Many were created in the last two centuries of the past millennium, but a good number of them have roots in medieval city planning or even roman times.

The 360°Images that follow present – without claiming to be complete – some of the most representative squares in the city, taken at a time when traffic and parked cars would be less invasive. Normally you would find them more crowded.

The Center of Milan: The Duomo and the adjacent squares

Four 360° Images to present the true Center of Milan. First of all Duomo Square, “Piazza Duomo” with its impressive gothic cathedral, from two viewpoints: from the front on a Christmas night and from the side with the Royal Palace “Palazzo Reale” and Square of Arengario Palazzo dall’Arengario with the Museo del Novecento. A few meters aways you can find Piazza della Scala with the famous Theatre, the Statue of Leonardo da Vinci and Palazzo Marino, location of the City Hall. A short distance away we find the city’s past in the charming, tucked away Piazza Mercanti with the medieval Palazzo della Ragione, also called Broletto.

The center of Milan at dawn: Duomo Square with the Cathedral and the Gallery

Royal Square with the Palazzo Reale, the side of Duomo and the Museum of ‘900

St Fedele Square: the Church and Monument to the famous novelist Alessandro Manzoni

The Squares of the Historical Center of Milan

It takes only a few minutes on foot to reach the squares of the center of Milan that even the most hurried tourist shouldn’t miss. Interesting are Piazza degli Affari, location of the Borsa di Milano (Milan’s Stock Market) and the famous Piazza San Babila. Well known to tourists is the Saint Mary of the Graces Square, “Piazza Santa Maria delle Grazie”, where you can find the church with The Last Supper, “il Cenacolo” by Leonardo da Vinci and finally Sempione Square, “Piazza Sempione” with the Napoleonic Arch of Peace, Arco della Pace.

St. Mary of the Graces Square with the entrance to Da Vinci’s Last Supper 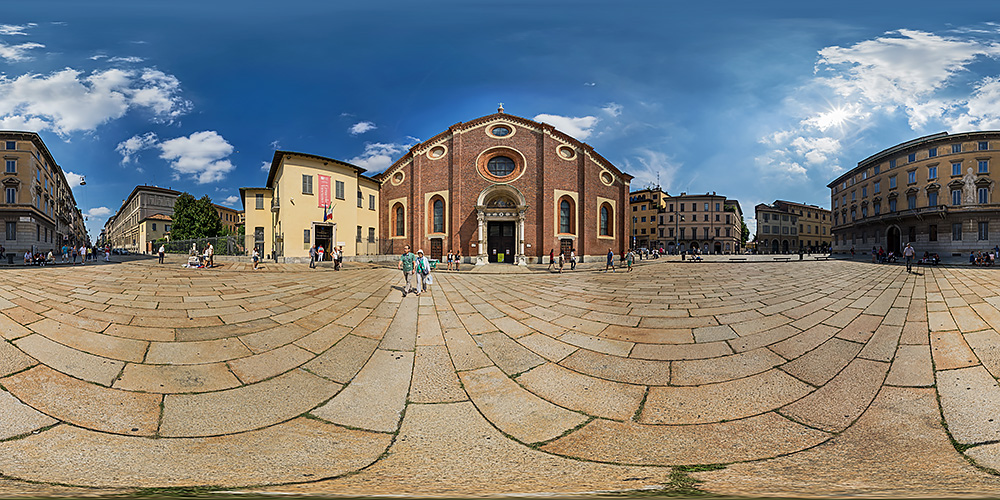 Sempione Square with the Peace Arch. At a distance the Sforza Castle